2017 Npower volunteers often asked the difference between the Onboarded and Enrolled icon reflecting on the 2017 Beneflciary profile page. The difference are simple, you should note that if your status still reflects onboarded, then you are undergoing the validation process and if your status have changed to enrolled that means you have scaled validation and you are processed for N-power payroll.

kindly see the image below for . #NPowerNG answer 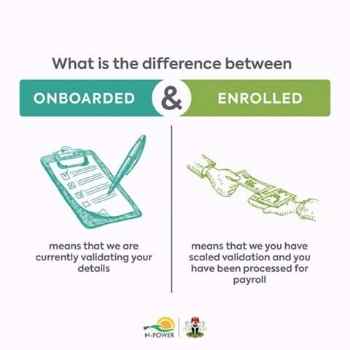 Npower also said that those whose letters have not been approved, you will still get your August stipend but ONLY after your details have gone through the process. And for the beneficiaries whose state have not submitted their deployment list they will still collect their August stipend if they submit later after théy have gone through the process.