In line with the commitment of Federal Government to wean the country off over dependence on oil by promoting the development of other sectors of the economy, the Vice President, Professor Yemi Osibanjo SAN, on Thursday, September 6, 2018, commissioned FCT's Micro, Small and Medium Enterprises (MSMEs), One-StopShop.

Speaking at the occasion, the Vice President, who was represented by the Minister of State for Industries, Trade and Investment, Hajiya Aisha Abubakar, described the One-Stop-Shop as a platform designed to eliminate the hassles that start-up businesses encounter in their efforts to access registrations and other support services provided by government agencies.

Under the arrangement, spaces are provided under one roof for agencies like the Corporate Affairs Commission (CAC), the Small and Medium Enterprises Development Agency of Nigeria (SMEDAN), Nigeria Export Promotion Council (NEPC) and others. So far, the shops have been launched in six states including Cross River, Osun and Plateau states among others. But the Abuja shop is the first fully digitalized platform.

In the Vice President's words, "All the assistance you need to start your business is domiciled in one place, including the ones provided by the Abuja Enterprise Agency. The candidates have to deal with a familiar environment when he or she could easily access the mini suites in order to overcome the stress, or fright and intimidation that come with dealing with huge or distant organizations and agencies".

The Vice President also used the occasion to distribute grants of N20, 000.00 each to 223 market women in the Federal Capital Territory (FCT), under the umbrella of their various cooperative societies.

Earlier in his welcome address, the Minister of Federal Capital Territory (FCT), Malam Muhammad Musa Bello, represented by the FCT Permanent Secretary, Sir Chinyeaka Ohaa, remarked that the MSME sector was crucial to job creation, economic empowerment and poverty alleviation among a majority of Nigerians.

He said: "I would like to acknowledge the energy and resources His Excellency, the Vice President, has invested in the promotion of MSMEs in the country. His drive and passion bear eloquent testimony to the faith of President Muhammadu Buhari’s government in the subsector”.

According to the Minister, MSMES onestop-shop provides required institutional framework for the coordination and execution of the national policy on MSMEs and synergy among all stakeholders, stressing that this would ultimately culminate in the attainment of National Enterprise Development Programme (NEDEP) in the FCT.

"As we are all aware, the MSMEs OneStop-Shop is designed to provide sound institutional framework for the coordination of implementation of the National Policy on MSMEs as well as provide linkages and synergy among all stakeholders. This is with a view to ensuring the effective execution of the National Enterprise Development Program (NEDEP) in the FCT. among others, he explained”.

Also speaking during the commissioning, the Managing Director and Chief Executive Officer of Abuja Enterprise Agency (AEA), Malam Muhammad Tukur Arabi, revealed that so far the Agency has created 12,517jobs and supported over 15,000 MSMEs in terms of providing business support services and access to hnance.

Malam Arabi further disclosed that the Agency has sensitized over 8,500 businesses on regulatory issues, government support programmes and projects. 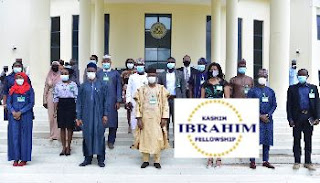