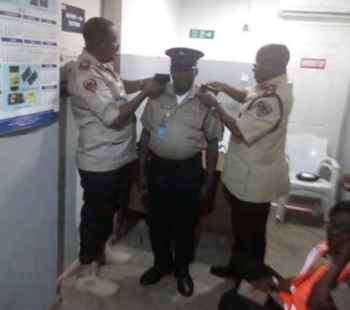 Sequel to the approval by the Secretary to the Government of the Federation (SGF), Boss Mustapha and in line with the Federal Road Safety Commission (FRSC) Board approval on the recently conducted promotion exercise, the result of the 2017 promotion exercise has been released. Consequently, a total of 4,660 personnel of the Corps benefntted from the exercise.

Speaking on the exercise, the Corps
Marshal of FRSC, Dr Boboye Oyeyemi while congratulating the promoted staff, urged them to justify the confidence reposed in them through improved productivity. He stressed that Management will continue to reward hard work, excellence and improved productivity by the staff, noting that indolence and indiscipline will not be condoned . He also assured that the integrity of the FRSC promotion exercise will continue to be protected and charged those promoted to intensify efforts at ensuring that they improve in productivity in their new ranks.

It would be recalled that in line with its philosophy of Consultation, Reward and Punishment (CRP), FRSC Management instituted annual promotion exercise to address issues of staff career progression and backlog of promotions.