Why N-Power Volunteers Can Be Useful In NPC Census Conduct.

Why N-Power Volunteers Can Be Useful In National Population Commission Census Conduct. 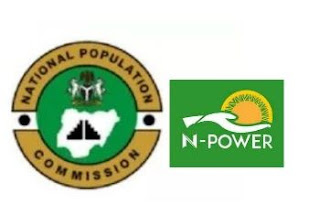 In regard to the call by Nigerians asking the federal government to mandate the National Population Commission (NPC) to immediately conduct fresh census to determine the country's actual population figure, we think that the N-Power volunteers scattered around the 774 local government areas across Nigeria is great asset NPC can use for the conduct of census.

The National Population Commission (NPopC) of Nigeria whose statutory powers is to collect, analyze and disseminate demographic data in the country. It is also mandated to undertake demographic sample surveys, compile, collate and publish migration and civil registration statistics as well as monitor the country's Population Policy. Looking at what the NPC does and relating with the experience N-Power Volunteers have gained in the area of data collection, they are probably the best option to be use for census conducted.

The N-Power has gained experience in different field of endeavor since the Federal government established the Programme and engaged about 500, 000 graduates in the education, health and Agriculture field, not talking about the other 200,000 non graduate engaged to acquire skills. This Volunteers has already gained experience in data collection because the have been used to conduct different survey and data collection related jobs.

For instance, the N-Power volunteers has been used by mobile Forms a company that create forms online and collect quality data using any mobile device for survey and data collection. Some of the volunteers have also participated as election officials, election field agents and TraderMoni Agents which involves monitoring and data collection. The volunteers have also participated in immunization conduct in their communities and different extension work as relate to their place of duties.

The last census conducted by NPC was in 2006 and should have had another in 2016 in line with the 10-year global requirement. The Nigeria population figure is currently estimated to be above 200 Million base on assumption. So, it is very important to urgently conduct another census to determine the actual figure of Nigeria population.