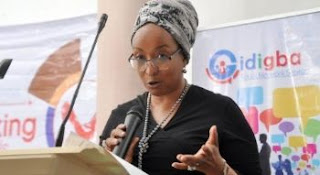 The special advisor to the President on social investment programmes, Mrs Maryam Uwais was in bayelsa state today been the 7th day of August 2019 to address Npower beneficiaries towards preparation for life after N-power Programme and the official flag off ceremony of the MarketMoni/ TraderMoni programme, an cash transfer programme, an home grown school feeding programme in the state.

In her long sermon, she hoped beneficiaries must have started their own businesses by now and pray they all succeed in their endevours because gradually the N-power programme is coming to an end.

She gave counts of 2016 bayelsa state N-power beneficiaries in each local Government that will be rounding up the programme.

According to Mrs Maryam Uwais,the federal government in collaboration with state government and private sectors are sorting for more ways to engage volunteers as they gradually come to the end of the program.

In her speech,she said that the Bayelsa state governor, His Excellency Henry Seriake Dickson has promised to recruit N-power beneficiaries of the state.

She also said that the Federal government are in partnership with private sectors in the country, and there are opportunities for those N-power volunteers nation wide willing to work in that sector one of which is the job of a bank agent, here beneficiaries will be trained on the job and they are to pay the sum of 50,000.00 Naira but this will now be paid by the federal government. We have also come to an agreement with the Inspector general of police to recruit some of our beneficiaries as community police officers.

For those N-power beneficiaries nation wide interested in the Agricultural sector, they will be given some hectares of land to farm and a refundable loan to start with. She asked beneficiaries to always check on their NPVN profile as more updates will be made available.