Tuesday,12,November 2019, Hon. Taiwo Oluga moved a motion on the plight of some beneficiaries of the N-Power program, especially in the teaching profession being excluded from subsequent benefits. In leading the debate, she stated that the beneficiaries who have their stipends withheld are supposed to be those with queries on truant behaviour, but it has become worrisome, especially in the Southwestern states where credible teachers have their stipends withheld without any queries or stipulated offence.

She however, urged the House to investigate the issue to set the records straight if the program is becoming discriminatory or some people are trying to sabotage the good efforts of the Federal government aimed at helping out Nigerians, and maybe carry out some form of financial mismanagement. As an investigative motion, it was voted on and adopted. 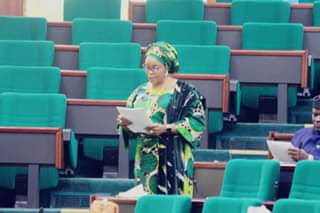