As A Mother, I Join The Calls For Police Reform - HM Sadiya Farouq 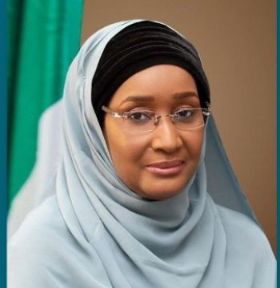 According to HM Sadiya Umar Farouq, as a mother, sister & aunt I want to join ongoing calls for reforms in the police force. We need an urgent conversation that ensures the police do their work properly while keeping our young people safe and free from harassment. Young lives matter.

I have been deepIy saddened by the reported loss of lives & wish to call on the police to exercise caution and restraint in dealing with protesters. I also call on our youth to eschew violence as they demand reforms, Sadiya Umar Farouq said.

The Minister also recall her activities within the week. She said, on Monday I attended the Joint Executive-Legislative Leadership Retreat, at the State House with the President Muhammadu Buhari in attendance. Our deliberations focused on the need to align FG's 9-Point priority Agenda with the Legislative Agenda of #NASS.

On Wednesday I attended the Federal Executive Council (FEC) meeting alongside other cabinet colleagues who made presentations. The president Muhammadu buhari presided over the virtual FEC meeting. On Friday I visited Kaduna state on behalf of HE Muhammadu Buhari to condole with the Govt and people of Kaduna State over the Windstorm and flood that occurred in some LGAs of the state and also to flag off the distribution of palliatives to vulnerable members of the populace whose livelihood was affected by the movement restrictions enforced to curtail the spread of the Covid-19 and presented relief materials (food and non-food items) to the state for the victims of the wind and flood disaster.

The Minister also review are visit to Jigawa. She said, I also visited Jigawa state to commiserate with and flag off the distribution of relief materials to citizens affected by floods in 13 LGAs. The FG's action is to complement the ongoing efforts of the state government.