Exited Npower Volunteers Have Decided To Join Their colleagues in the street across the Country in the ongoing EndSars and Endbadgovernance protest to remind the government of their pending transition plan. 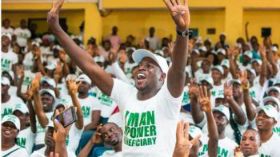 In an update shared on one of their popular discussion forum, which says:

This is to notify the general public that @Npower_ng will now be part of the general ongoing protest #endsars, this is as a result of continuous betrayal by some bad elements in our midst who are here to frustrate our efforts of getting what rightly belongs to us.

We have finally decided that all genuine excited Npower beneficiaries should join the ongoing #endsars protest with NYC banners and handbills for distribution.

All we need now is for each state to organize themselves and print at least one banner (#4500) with handbills as much as possible, other people can carry placards as well.

Please share with all genuine exited beneficiaries, they concluded.

Both Npower batch A and B beneficiaries has been exited to be transition into other government programmes and the management have asked the beneficiaries to be patient as they are working on a successful transaction for them.

But it seems the volunteers are running out of patience and are now demanding quick action from the government.