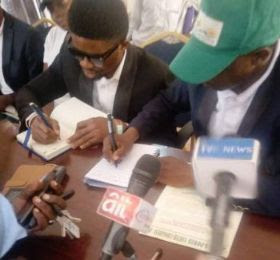 I stand on the already established protocol to render my unalloyed gratitude to all NYC State Coordinators, Local Government Coordinators and all Npower beneficiaries who made this Press conference a reality. To all members of the press here present, I say thank you for hearing our cry.

Let me start by consolidating and sympathizing with all victims of ENDSARS protest, most especially the patriotic victims of Lekki Toll Gate. To all the relatives of all those that were immortalized, we pray that the almighty God will give each and every one of you the fortitude to bear the loss. And for all those who were critically injured, we pray for quick recovery. Finally, for those who lost their properties, cars, broken shops, burnt house and offices, etc we pray God to replenish all in due time.

This is the third press conference we are holding on this same issue but yet, our government whom we served selflessly has refused to listen to our demands. I critically followed the presidential speech yesterday as a response to Endsars protest demand, but lo and behold, nothing was said about the fate of 500,000 Youths that were disengaged from Npower scheme.

We are hereby reminding the President once again of his promises to us and that we will never relent until our cry is heard. The State Representatives of Npower Beneficiaries have earlier stated our demands on the previous Press Conference and here we are reinstating the demands again as follows:

The Batches A and B of Npower Beneficiaries whom according to the Minister of Humanitarian Affairs and Disaster Management were disengaged since the month of June and July respectively are not happy for being sent back to the streets. We were struggling in different spheres of life to make a living. We were meant to quit the things we were doing before to embrace Npower with the promise of being absolved into the Federal Government scheme at the end of the day. We were made to serve our fatherland with a token of 30,000.

Most of us have families with children, paying of school fees, electricity bills, pipe borne water, transportation, feeding and other miscellaneous expenses on the grace of 30,000. How much is a bag of rice, ground nut oil, etc if I may ask? Some of us have siblings and sick parents whose hopes are attached to the same 30,000. To worsen it all, the same 30,000 will not be paid as at when due.

Funny enough, our government under the control of Sadiya Farouk, the Ministers of Humanitarian affairs and disaster management want us to save from the 30,000. This is an amount that is not up to one quarter percent of what they give to their children for shopping, an amount that does not reach what their children put on as cloths and jewelries on daily basis In addition, we can recall that before the 2019 Presidential Election, we were made to understand by Mr. Afolabi that our voter's cards determine our permanency.

We mobilized ourselves, came out in mass to support this government. We spent our money going to Abuja for the campaign so as to ensure that President Muhammad Buhari regains his office as the president of Nigeria. Npower beneficiaries in various states and Local Governments were equally forced by their focal persons to come out in mass during APC campaign. So many states even took attendance and beneficiaries that didn’t show up were penalized.

All these were geared towards ensuring that Mr. President, President Muhammadu Buhari excel as the president so that the promises of absorption that was made through Mr. Afolabi will be fulfilled. But at the end, our hopes were truncated as we have been pushed back to the streets without absorption or an exit package.

We hereby call on the president to please fulfill your promises. Absolve those that want to work as Federal Government Staff and give substantial reasonable exit package to those who would like to venture into businesses.