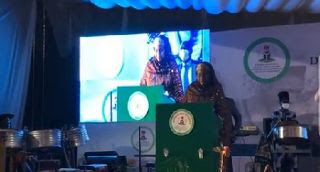 At the unveiling held at the International Conference Centre Abuja, Minister Umar Farougq said that GEEP 2.0 is one of the National Social Investment Programmes established by the President Muhammadu led administration to assist the skilled but unbanked vulnerable population.

“GEEP targets the unbanked poor and vulnerable but skilled population that has always been left out on credit delivery programmes and is directed at providing soft and affordable loans to finance their businesses. The GEEP is innovatively targeted and delivered under three unique products. The TraderMoni for marginalized youth, MarketMoni for vulnerable women and the FarmerMoni specifically for rural farmers”.

“The GEEP 2.0 is structured to effectively deliver soft loans and skills to a wide range of unemployed citizens including persons living with disability, marginalized women and unemployed youth amongst other vulnerable groups in our society”.

The program is expected to empower Nigerian farmers especially in the rural areas, deliver rapid scale-up of Farmer Moni to agro-prenuership for increased agricultural produce, food security, and job creation. Market Moni targets the underprivileged and marginalized women in the communities while Trader Moni aims to empower and uplift underprivileged and vulnerable youths, scavengers, market wheelbarrow boys, orphans, and youth with special needs.

I call on all Nigerians who are specially targeted by the NSIP and indeed the GEEP to please take advantage of all that the programme offers so that the vision of Mr.

President of lifting 100 million Nigerians out of poverty in 2030 will unfailingly be accomplished”.

In his keynote address, the Special Guest of Honour the Vice President, Prof Yemi Osibanjo who was represented by the Special Adviser to the President on Political matters Babafemi Ojodu praised the Minister for her doggedness in ensuring that vulnerable Nigerians are given a new lease of life.

He urged her to continue the good work until abject poverty is stamped out of the country. “We thank you and your team for the sleepless nights, your perseverance, and the hard work with which you are forging ahead.

You and your team are the custodians of a major item on the manifesto of our party. Mr. President is passionate about our people and the majority of those who voted for him in 2015 and 2019 are looking up to him to be their saviour and benefactor.

“Today marks the beginning of an effort to re-engineer and reposition a program that will widely empower the people. | urge you to continue to push and work hard until we touch and change the lives of poor Nigerians in the remotest parts of the country”.

Earlier, the Head of the GEEP Cluster Ms. Zainab Munsawa assured that the new and invigorated GEEP 2.0 has been reprogrammed to touch more lives.

“The new organizational structure and model of implementation was introduced to focus on surplus loan amounts and new target beneficiaries dedicated exclusively to empower the poor and vulnerable women, marginalized youth with enterprising skills, giving special consideration to agricultural empowerment in rural areas”.

There were goodwill messages also from Mr. Sunday Dare, the Youth and Sports Minister who represented the Secretary to the Government of the Federation Mr. Boss Mustapha, the Minister of State Budget and National Planning Prince Clem Agba, the Minister of Women Affairs Dame Pauline Tallen, Minister of Labour and Employment Dr. Chris Ngige, Minister of State Education Mr. Emeka Nwajiuba, Chairmen of the House and Senate Committees on Poverty Alleviation, the Permanent Secretary of the Ministry Bashir Nura Alkali, directors of the ministry and other distinguished guests.