Drama As headmistress Denied Npower Volunteer PPA Rejection - The issue of Npower Redeployment has been an issue some of the Npower batch C beneficiaries are facing since the deployment began. Some of the beneficiaries that have been posted to a PPA that is far away from their location have resulted to seek for a change of PPA but it has not been easy for some of them to get their PPA deployment letter rejected. A typical example of this situation is the story of the Npower batch C Volunteer below. 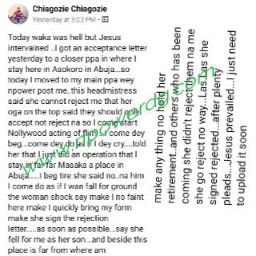 You may want to also check out Npower C1 Physical Verification Documents, Location, And Date Update

Today waka was hell but Jesus intervened. I got an acceptance letter yesterday to a closer PPA where I stayed here in Asokoro in Abuja. So today I moved to my main PPA where Npower post me, this headmistress said she cannot reject me that her oga at the top said they should only accept not reject.

So that is how I started to act Nollywood film. I started begging and doing as if I am crying, I told her that I just did an operation that I stay in far Masaka a place in Abuja.

I beg her until I got tired and she said no! Then I started behaving as if I want to fall on the ground and the woman was shocked and she said that I should not faint here, that I should quickly bring my form so that she can sign the rejection letter as soon as possible. She said she feels for me as her son and besides this place is far from where am staying and she said she wants to retire so she has to avoid anything that will hold her retirement.

She said others who have been coming she didn't reject them, is it me that she will reject? No way. At Last, she signed rejected after plenty pleads. Jesus prevailed! just need to upload it soon.