Democracy Day recognises the end of military rule in Nigeria and the restoration of a democratic system of government, symbolized by the swearing in of the first president elect, Olusegun Obasanjo, on May 29, 1999. Though the day is the subject of some controversy, many Nigerians view the holiday as an opportunity to celebrate democracy and basic human rights.

In a country as exceptionally diverse as Nigeria, it should perhaps come as no surprise that Democracy Day is commemorated in many different ways. May 29 is viewed as a day to both honour the struggles and sacrifices on the long path toward democracy and to celebrate the country’s continuing progress.

For many Nigerians, Democracy Day is also an opportunity to educate others on the importance of participating in the political process, and to encourage younger people to value the rights for which so many people worked so hard.

May 29, 2015, President Mohammadu Buhari, was sworn in as the 4th President of Nigeria since restoration of democracy in the country. However, today May 29, 2017 marks the second year anniversary in office of the present administration. 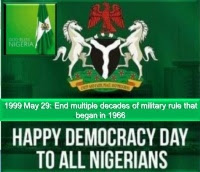