This Gombe senator who claimed nobody benefit from Npower scheme in Gomble. it really show that the senator is far from his constituency or not close to his people. Npower is really working and not a scam. 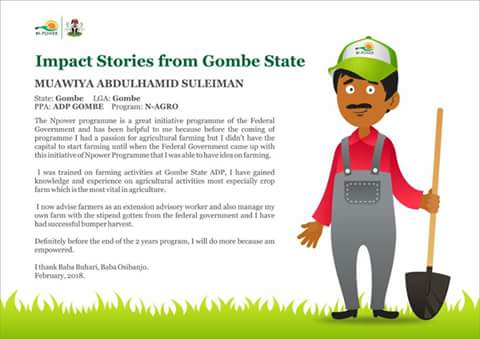 Muawiya Abdulhamid Suleiman shares the impact he has had in his community as an N-Power Agro Beneficiary in Gombe State.

I was trained on farming activities at Gombe State ADP, I have gained knowledge and experience on agricultural activities most especially crop farm which is the most vital in agriculture.

I now advise farmers as an extension advisory worker and also manage my own farm with the stipend gotten from the federal government and l have had successful bumper harvest.

Definitely before the end of the 2 years program, I will do more because am empowered.