Earlier today at NYSC Orientation camp in Kaduna, a guy who came to visit his girlfriend proposed to her in public where groups of youth corpers were busy participating in their morning activities. 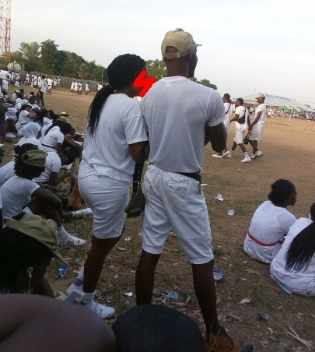 According to report from the source who is equally a corps members, the guy who proposed to his corper girlfriend is not a corper. He actually came for visitation and took permission from the camp management officials before he carried the action.

Normally visitors are allowed for visitation every Sundays from morning till 4pm and he took that opportunity to surprise his girlfriend. What a nice place to declare your intentions to a woman.

Some corpers could not hide their expression as they are been seen cheering the young man and his girlfriend.