How Buhari Administration Is Lifting Nigerians Out Of Poverty - VP Osinbajo 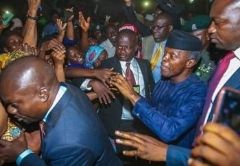 The implementation of the Buhari administration's micro-credit schemes namely; the TraderMoni and MarketMoni, and other initiatives are some of the ways by which the Federal Government is incrementally lifting Nigerians out of poverty, according to Vice President Yemi Osinbajo, SAN.

The Vice President who stated this on Thursday when he continued interactions with Nigerians across diverse backgrounds with visits to Karu, Mpape and Kubwa, all satellite towns in the FCT, said more Nigerians would be lifted out of poverty if the is government re-elected for another term.

According to him, "for the very first time in the history of this country, loans are being made available for petty traders, small traders. "It is the love for the common man that informed this government's decision to empower the poor." At Mpape community, Prof. Osinbajo told a gathering of artisans, women, community leaders and youths that the government of President Muhammadu Buhari was for the common people and had demonstrated same through the various empowerment schemes.

"There is MarkeMoni; there is TraderMoni; the TraderMoni is for the petty traders, the small traders, selling groundnut and other small businesses; we give them N10,000 when they repay, they get N15,000, N20,000 and on and on like that.

Explaining the rationale behind the microcredit schemes of the Buhari administration, the Vice President said it was a step to help the traders move up.

"Because every one of us must start from somewhere, when you start poor, somebody must help you to become rich, if you are a small business woman, somebody will help so that you too will become a big business woman."

Continuing, he said, “that is why President Muhammadu Buhari started this TraderMoni so that market women can grow their businesses gradually and after a while, they too will have enough money to be able to build their own houses and everything they want to do. "The MarketMoni is for the bigger trader and artisans, it starts at N100,000, but you must be part of a cooperative in order to benefit from the MarketMoni.

"So, we are trying very hard, God helping us, if we are voted in, February 16, it's the Next Level. Next Level for TraderMoni, for MarketMoni, for all the programmes that we are doing." He assured the artisans that the Buhari administration was setting up a bank to be called the PeopleMoni Bank to lend money to artisans so that they could also grow.

Earlier at Karu, Prof. Osinbajo addressed enthusiastic members of Karu-Jikwoyi Women Progressive Movement, assuring them of the commitment of the Buhari government to improve the lots of women. He told the women that petty traders among them would benefit from the TraderMoni scheme and other initiatives designed to uplift their lives and those of their families. The Minister of Women Affairs, Aisha Abubakar, also addressed the women on how various social intervention programmes would impact their lives.

In Kubwa. the Vice President's first point of call was the Yekini Aminu family at Information Quarters, where he was received by an excited and jubilant crowd among them youths who thronged the streets, danced and chanted 'four plus four, four plus four, as the Vice President's motorcade arrived Phase 4 area in Kubwa. After a brief chat with his host, the Aminu family, the Vice President addressed the crowd on the various empowerment schemes of the Federal Government and proceeded to the Gbazango area of Kubwa to continue his visit to the area.

At Gbazango, Prof. Osinbajo and entourage proceeded to the family compound of 102 year-old Sunday Kukwaba Gazazhin, a respected Gbagyi family, accompanied by a jubilant crowd comprising residents of Gbazango and environs, including traders from the Kubwa village market. He had a chat with the patriarch of the family and other family members through an interpreter before leaving Kubwa.

Vice President Osinbajo who had earlier launched the “Green Imperative", an agricultural sector mechanization initiative, and chaired the monthly meeting of the National Economic Council, before leaving for the engagements in the FCT communities, returned to the State House to receive a coalition of Buhari 2019 support groups under the auspices of the "We Believe Movement", who had embarked on a solidarity walk from the Unity Fountain to the Eagle Square.

Laolu Akande
Senior Special Assistant to the President
on Media and Publicity
Office of the Vice President
January 18, 2019