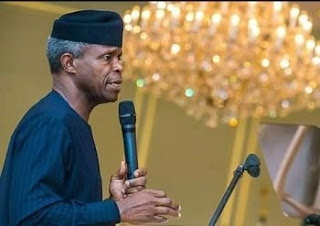 As Nigerians look forward to the 2019 general elections starting Saturday with the Presidential and National Assembly polls, Vice President Yemi Osinbajo, SAN has called on Christians to remain steadfast nothing that "their prayers will make the difference for Nigeria"

The Vice President stated this Thursday in Jos at a one-day special prayer forum for a peaceful 2019 elections in Plateau and Nigeria in general. It was organized by the Plateau State Chapter of the Christian Association of Nigeria (CAN).

Prof. Osinbajo added that the role of the church in the development of any society is for Christians to support their members in leadership positions through prayers and fasting.

‘The role of the church in order to bring about the plans and purposes of God to pass in our nation is to fast and pray for those that are in government. God's plans and purposes for this nation rest on the shoulders of the Children of God,” the Vice President noted.

Continuing, he stated that "it is your prayers that will make the difference for our nation. I want to say to you again that please continue to pray and to fast for those of us who are in government because we are there as the seeds that God has planted in this nation; we are the salt, we may not be plenty but salt does not have to be a lot to make a difference."

The Vice President, who admonished Christians to look inward for solutions to the problems of the nation, said: "If we look elsewhere we will make a very big
mistake."

On his part, Gov. Simon Lalong of Plateau State said the Vice President's visit in the state, for prayers, a few days to the elections, was a sign of a peaceful outcome.

He thanked God for sparing the life of the Vice President from the helicopter crash in Kogi State recently.

Rev Fr Polycarp Lubo, Plateau CAN Secretary said that the desire of the body was to have peaceful, free, fair and credible.

He appreciated Osinbajo for honouring the invitation and prayed God to be with him during and after the elections.

The programme featured special prayers for the political leadership in Nigeria and for peaceful elections. There were also praise and worship sessions, amongst others at the well-attended prayer forum.