FG Reaffirms Its Commitment Towards Improving The Living Standards Of Nigerians.

The Federal Government has reaffirmed its commitment towards improving the living standards of Nigerians by the execution of projects across the country and also demonstrated the sincerity of purpose of the President Buhari led administration towards entrenching justice, equity and fair play to the Nigerian people.

Speaking during the Commissioning and handling over Ceremony of the Erosion Control Works at the Faruruwa Bridge ,Faruruwa Ward Road, Takai Local Government Area, Kano State, executed by the Ecological Fund Office, under the Office of the Secretary to the Government of the Federation (OSGF), on Saturday 21st December, 2019,President Muhammadu Buhari, who was represented by the Minister of Agriculture and Rural Development, Alhaji Muhammad Sabo Nanono noted that no part of the country would suffer any neglect owing to its geographical location or political consideration.

President Muhammadu Buhari pointed out that " having satisfactorily completed this project, the living standard of the people in the community and its environs would be improved, and at the same time reduce hazard to lives and properties associated with erosion menace that had been experienced in recent times ".

The President stressed that " let me underscore the Present Administration's determination to continue with the implementation of all genuine Government policies,agreement and contracts at both National and International levels by laying a solid foundation to our pursuit for strength and prosperous nation on the path of unfettered development"

Buhari informed that "at this critical moment of our nation building and economic recovery, there is no doubt that the project will provide a window of opportunities for economic growth in the community "

He stated that "the project which is one of Five Ecological Intervention projects approved by his Government for the third quarter, 2018 and was awarded by the Ecological Fund Tenders Board on 12th April, 2018, is expected to address the twin Ecological problems of Flooding and erosion within communities and its environs ".

He further said that " the age long problem of gully erosion and flooding in this part of the country cannot be over emphasised, I have no doubts in my mind that this intervention will bring a huge relief to the communities and around its location ".

The President lauded the Secretary to the Government of the Federation, Mr. Boss Mustapha, his team in the Ecological Fund Office, the Project Contractor, Messrs Jerrynel Construction Company and the Consultant, Messrs NIN Engineering Limited for their determination in ensuring timely and speedy completion of the project.

He also appreciated the Takai community for their cooperation and provision of a hostility free environment during the course of the project execution.

In his remarks, the Executive Governor of Kano State, Alhaji Abdullahi Umar Ganduje,who was represented by the State Commissioner of Environment, Dr. Kabriu Ibrahim said that the project would add value in the community, terms of provision of access road network to the people as well as increase the Internal Generated Revenue of the Local Government vis a vis the State Government.

Governor Umar Ganduje thanked the president for bringing the project to the community and also appreciated the SGF and his team for the completion of the project.

In his welcome address, the Permanent Secretary, Ecological Fund Office, (EFO),Dr. Habiba Lawal, represented by the Deputy Director, EFO, Engr. Nwachukwu Ugochi said that " the commissioning and handling over of the project to the benefitting community is expected to achieve the dual purpose of enabling the host community to take over and exercise ownership over project, ensure its maintenance and sustainability".

Dr Lawal warned that the resources which the Federal Government had committed to this project must not allowed to waste. 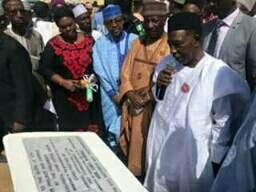