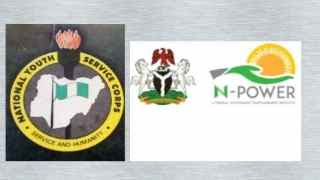 Earlier today when the news of increment of NYSC allowance to N33,000 went viral online, some N-power volunteers could not hold their thought in regards to the news and some of them decided to discuss the possibility of N-Power stipends increment.

A Volunteer asked that now that NYSC DG has confirmed that NYSC allowance has been increased to 33k, what about NPower because we are higher than corpers by qualification? And some of them react as followed:

There are laws backing the establishment of the NYSC scheme, but there's no law backing the npower scheme. Npower is an empowerment scheme meant to empower youths of all categories both SSCE, ND, NCE, HND, B.Sc, M.Sc and Phd holders. NYSC is for a certain category of the youths. (HND and B.Sc). In and empowerment program, the initiator of the program decides on any amount he chooses to empower the beneficiaries with, he doesn't work with the current minimum wage. For instance, the FG started paying npower beneficiaries 30k even before the implementation of the 30k minimum wage, but NYSC follow due laws, as the 33k is based on the current minimum wage which is 30k and an additional 10% above the minimum wage as the law stipulates says the volunteer.

The screenshots below shows more reactions from the volunteers: 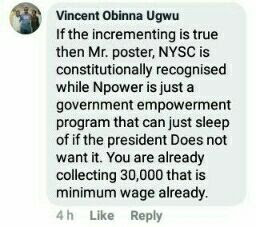 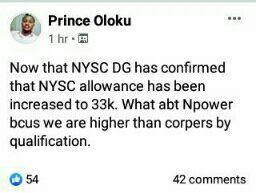 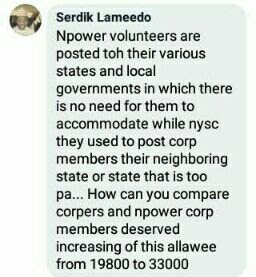 The Director-Generel, Brigadier General Shuaibu Ibrahim has cleared the air on the amount approved as Corps Members‘ monthly allowance by the Federal Government in line with the new National Minimum Wage. He disclosed this while speaking to Corps Members at the NYSC Bouchi State Secretariat during his working visit to the State.

Ibrahim explained that contrary to the varous amounts being circulated on the social media, the sum of thirty-three thousand naira had been approved as the new rate. He also said provision had been made for the new allowance in the year 2020 Budget, adding that payment would commence as soon as funds are released by the appropriate authorities.

Speaking further, he advised the Corps Members to always be security conscious just as he warned against rumour mongering and negative usage of the Social Media.

He admonished them to avoid unauthorized journeys and when authorized to travel, not to do so at night because of the inherent danger