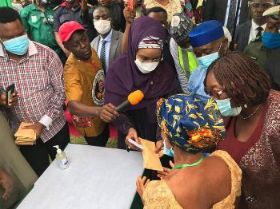 On the occasion, the Minister of Humanitarian Affairs, Disaster Management and Social Development Sadiya Umar Farouq who flagged off the event stated that 24,929 beneficiaries from 9 Local Government Areas will share the sum of N993,450,000.00 across the 30% select local government Areas of the State.

The Minister also commended the people of Akwa |bom especially the women who she said have excelled in virtually all areas of human endeavour against all odds.

"Women from Akwa Ibom have played and continued to play a prominent role in poverty eradication in the state and are pivotal to our poverty elimination programmes.

Whom the war against corruption, President Buhari has prioritized social protection interventions to pull 100 million people out of poverty over the course of 10 years. As part of efforts to actualize this dream, the government established the Federal Ministry of Humanitarian Affairs, Disaster Management and Social Development to consolidate on existing social safety net programs at the Federal level, ensure policy cohesion and effective implementation of social protection programs in the country".

"A coordinating body has also been set up with support from the World Bank, alongside a Social Register of poor and vulnerable households (PVHHs) for targeted programmes".

The Minister said that the beneficiaries will get all that has accrued to them since 2019 when they were formally enrolled.

Earlier, the Deputy Governor of state who represented the Governor thanked President Muhammadu Buhari for extending the program to Akwa lbom state and called on the minister to also send more palliatives to the state to assist the indigenes during the post COVID-19 period.