According to Facebook CEO Mark Zuckerberg, we're less than two months away from the US elections, and we are seeing a massive shortage of poll workers to staff voting stations. Shortages can lead to hours-long waits at the polls, which makes it harder for people to participate in the democratic process. It is estimated that almost half a million poll workers will be needed this year -especially due to the ongoing Covid pandemic.

To help attract more people for these critical jobs, Facebook is launching a poll worker recruitment drive this weekend, making it easy for people to sign up and serve as a poll worker with their state election authorities.

To do this, Facebook will show a message at the top of News Feed to people in the US over the age of 18. Facebook have also offered free ad credits to every state election authority so they can recruit poll workers across Facebook platforms. California has already started running these ads and several more states are joining in the coming days. We're also offering paid time off to all employees at Facebook in the US who want to volunteer to staff the polls.

How to apply:
If you plan to serve as a poll worker, check out the poll worker section in the Voting Information Center, which you can find in your menu bar on Facebook as seen in the image below: 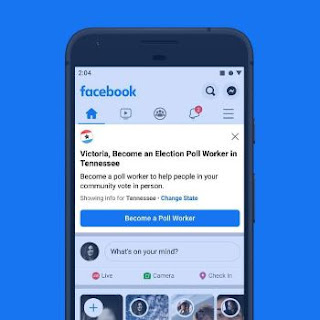 Priscilla and I have also personally donated $300 million to non-partisan organizations supporting states and local counties in strengthening our voting infrastructure. Voting is voice, and in a democracy, it's the ultimate way we hold our leaders accountable and make sure the country is heading in the direction we want, Mark said.

With Covid affecting our communities, this election will be unlike any other we've seen. We are doing everything we can to help as many people as possible register and make their voice heard at the ballot box.