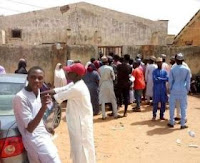 The Prospective Npower Volunteers have asked the Npower management team to release the long awaiting bach C Recruitment list to save them from scammers who are trying to rape them off their data. This came as a result of this Npower shortlisting names circulating online which the management of Npower have come out publicly to say that the information is fake.

Below is how the prospective Npower Volunteers are reacting to the management response regarding the fake Shortlist:

Abbey mike said: I don't understand this government. They put all recruitments on hold. Npower, NSCDC, NDLEA, CUSTOM, INEC, POLICE. E.T.C and they are still advertising new recruitments such as NYIF, ARMY, FMARD E.T.C. complete these recruitments and create new ones to reduce unemployment.

Musa Muhammad Dikwa said, then update the public about the batch C you're busy posting fake news while you Say after two weeks of applying you're going enroll the new batch.

AGBOCHENI MOHAMMED said Oya, then release the correct one now our own batch was not adulterated like this. This one is been characterized by politicians interest.

Another prospective Volunteer said, Most likely towards election 2023 they will update you guys that's there strategy. Why won't there be fake news in that regards when you completely abandoned the Npower arm of NSIP both exit package for batches A and B Npower beneficiaries and planned recruitment receive no serious attention but you keep gallivanting about unserious issues?

Aloysius Jennifer said when is the school feeding program kicking off again? The school pupils are hungry, the vendors are hungry and the farmers are hungry too. Please do something madam Sadiya umar farouq.

Excel Beauty said, what are you waiting for before you shortlist the chosen candidates? Selfish Nigerian government.

AL-KALAM said sometimes you're the problem creators, why don't you shortlist in time until some people start to scam the innocents?

Daodu busola sunday said, this is second time that you are counters fake news, do the recruitment in time now.