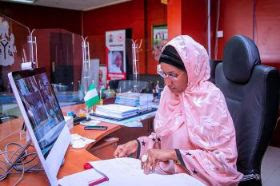 The Honorable Minister of Humanitarian affairs, disaster management and social development, Sadiya Umar Farouq in her weekly review update said Npower Scheme Remains One of the most critical components of NSIP. Read details below:

According to the Minister, on Monday she received in audience the Governor of Kwara state HE Abdulrahman Abdulrazaq who paid a courtesy visit to #FMHDSD and they had a very robust interaction during which we touched upon ongoing initiatives by #fmhdsd and how they impact Kwara State. Read also Link To Apply For Survival fund General MSME Grant

On Wednesday the Honourable Minister joined other cabinet-level colleagues at the Federal Executive Council presided over by the president HE/ Muhammadu Buhari. During the meeting, members observed a minute of silence for two late cabinet members who died recently; Alfa Wali and Tony Momoh.

On the same day, HM Sadiya Umar Farouq also received in audience HMoS for Niger Delta as well as HM Labour and Employment, Dr. Chris Ngige who paid courtesy calls to #fmhdsd. Their interactions centered on interconnections and linkages between respective ministries.

On Thursday, she flagged off the onboarding of N-power independent monitors. During the event, she emphasized the critical role that independent monitors play in the successful implementation of our programmes. Read also Five Things To Know About NSIP Independent Monitors

I touched upon the oversight they provide for the N-power programme which remains one of the most critical components of the National Social Investment Programme. I wished them luck in their endeavor, she said.

On Friday the Minister delivered the keynote address on the effective coordination of poverty eradication programmes in Nigeria at the first virtual meeting of the Secretary to Government of the Federation (SGF) with Secretaries to State Governments (SSGs).

It was an important event to help bring the key members of the state bureaucracies up to speed with our initiatives and programmes #fmhdsd especially as it concerns poverty alleviation. Read also FG Gives Update On NYIF Loan Disbursement

In her speech, she emphasised the role of stakeholders who include Governments, Non-Governments, development partners, Philanthropists, Communities, and individuals as well as our harmonize initiatives and efforts.

I also touched on some of the challenges faced in the implementation of these interventions at the state level, one of which is the implementation structure. I proposed the setting up of steering committees across States to ensure that we achieve the necessary coordination desired, the Minister added.