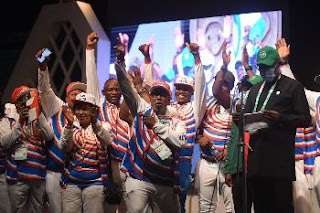 As the curtain for the 20th edition of the National Sports festival tagged Edo 2020 is finally closed, Delta state has been confirmed as the host for the 2022 National Sports Festival #Ed02020 After two weeks of excitement, record-breaking performances, the bond of friendship, and spirit of sportsmanship.

For the past 12 days, youth representing all the 36 States of the Federation and the FCT have been united by sports, friendship, and comradeship. The power of sports as a unifying factor in the country was fully activated as these youth set aside ethnic and religious differences. The 20th National Sports Festival has finally come to an end and the host city, Benin city has gone the extra mile to not only showcase its rich tradition but also treat the spectators to an exciting closing ceremony.

The Deputy Governor of Edo State @HonPhilipShaibu delivers the opening remarks at the closing ceremony of the 20th National Sports Festival #Edo2020 #NSF2020. He thanked all participants and recognized the LOC for a stellar execution of #Edo2020.