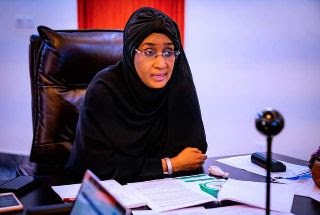 1) On Monday, in furtherance of our M&E self accountability mandate, the Minister flagged off the distribution of engagement letters and tablets to independent monitors in Bauchi State.

2) In her comments, she took time to remind them of their core mandate encapsulated in their scope of work:

a. Routine Monitoring of all programmes under the (NSIP) in their assigned LGA.

You may want to also read 128 NSIP Independent Monitors Gets Tablets, Engagement Letters From FG

b. Provision of an evidence based report on findings in the field.

c. Submission of various categories of reports by the set timelines.

d. Attending all training and meetings as required by #fmhdsd.

e. Other duties that may be assigned by the Ministry.

3) On Wednesday she attended the Federal Executive Council meeting alongside other cabinet level colleagues. It was presided over by HE Muhammad Buhari. Urgent matters of state were deliberated upon.

4). On the same Wednesday in consonance with my supervisory functions over agencies under #fmhdsd, she undertook an inspection of the recently renovated air ambulance belonging to #nema. And she was accompanied by DG #nema.

5) The air ambulance is a critical component for facilitating emergency response functions by #nema_ especially at a time like this when the country is facing sundry humanitarian challenges.

6) On Thursday she made a presentation at the National Economic Council (NEC) on the National Guide for the establishment and management of Sexual Assault Referral Centers (SARC) in Nigeria.

7) SARC represents one solution in several initiatives focused on enhancing coordination & response to Sexual & Gender Based Violence. Support services need to be available not only during times of crisis but also in the intervening period following an assault.

8) This aligns with the June 11, 2020, declaration of a state of emergency on rape and other Gender Based Violence against women and children by state Governors under the auspices of the Nigeria Governors Forum.

9) That declaration was in sync with Mr. President's oft reiterated determination to Fight Gender Based Violence through the instrumentality of the law and awareness creation.

10) The purpose of SARC is, therefore, to limit the physical & mental health consequences of rape & sexual assault by providing survivors with free & accessible medical assistance, forensic medical examination, counseling, and justice support services in a confidential and safe space. SARC is a one stop multi agency shop.

12) Finally, as the rains intensify, it is expedient to reiterate that according to early warning signals and annual flood predictions, 24 states remain in danger of flooding. We must activate emergency flood prevention and mitigation measures in proactive anticipation.

Have a great week.