ESP And AFJP Are Ways We are Providing Jobs - FG 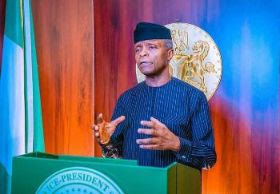 According to Vice President Osinbajo, ESP And AFJP Programmes Are some of the Ways that FG is Providing Jobs. He stated this during the presentation of the research report of Course 29 of the National Defence College, entitled: “Creating Jobs & Opportunities for Africa's Largest Youth Population”, at the Presidential Villa, Abuja.

The Economic Sustainability Plan (ESP) is a major plan of job creation, as a matter of fact, the major focus of our ESP is job creation, sustaining existing jobs, and then being able to create other jobs, VP Osinbajo said.

The Food for Jobs programme (AFJP) which is an agricultural programme is a major initiative that has led to the identification of 5 million farmers, and these farmers are geo-tagged to their farmlands which is the first time that this has been done in the history of the country.

Recently FG Approved Fertilizer Subsidy Grant For 1st Batch AFJP Farmers. They now have BVN numbers so that loans can be given to them and farm inputs as well. So, the Food for Jobs Programme is a major agricultural plan.

The Vice President also spoke about the social housing and solar connections being components of the ESP which have been prioritized by the Buhari administration to create jobs directly and indirectly for thousands of Nigerians, especially youths