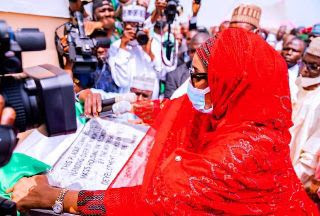 The Federal government has officially handed over the Ngwom 1,000 Mass Housing Units, built by the North East Development Commission NEDC to the Borno state government for Internally Displaced Persons.

The Minister of Humanitarian Affairs, Disaster Management and Social Development Sadiya Umar Farouq said during the handover ceremony, that the houses were constructed under the Special Presidential Intervention for the resettlement of Internally Displaced Persons in the state.

I will like to use this opportunity to commend the continuous efforts of the Managing Director and the entire NEDC team for carrying out their mandate.

I also thank the Governors of the states in the northeast for their support and commitment towards the rehabilitation, reconstruction and sustainable recovery of the region especially H.E Babagana Umara Zulum, the Governor of Borno State, for graciously hosting us.

I will like to reiterate that the Ministry of Humanitarian Affairs, Disaster Management and Social Development is committed to programmes and interventions that are humane, fair and inclusive.

Handing over the infrastructure to the minister, the Managing Director of the North East Development Commission Mohammed Goni Alkali recalled that the Special Presidential Interventions in Borno State (SPIB) were approved by President Muhammadu Buhari to ameliorate the desperate situation in the BAY states especially Borno state following years of destruction through insurgency.

l am glad to mention that the construction of the 1,000 houses at Ngwom site has been completed and contracts for the equipment of the Vocational and Technical Skills have been awarded and awaiting delivery.

The 1000 houses consist of Four Bedroom Semi-detached bungalows with veranda and courtyards in a cluster. Each block has four hundred square metres’ perimeters with ample space for other home activities including Solar-powered street lights, four thousand industrial Solar-powered Bore-holes and over three thousand economic trees.

Alkali stated that the construction of 500 Housing Units will be replicated in the other five member states of the Region.