According to Senator Shehu Sani, Sharing $350 million recovered loot to 180 million Nigerians is impossible. It will end up with beneficiaries whose names will be given by Governors, Ministers, Lawmakers and the President’s men. Let it be tied to a project Nigerians can see with their ‘Korokoro eyes'. 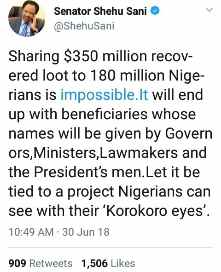 It was reported in the media that the Federal Government says it will commence disbursement of the recovered 322 million dollars Abacha loot through Conditional Cash Transfers (CCT) to 302,000 poor households in 19 states in July.

Mr Tukur Rumar, of the National Cash Transfer Office (NTCO), said this at a roundtable on assets recovery organised by the Swiss Embassy on Thursday, in Abuja.

The event was organised to intimate citizens and Civil Society Organisations (CSOs) on the efforts both nations were making on asset recovery after the Post-Global Forum on Assets Recovery (GFAR) held in Washington DC. in Dec. 2017.