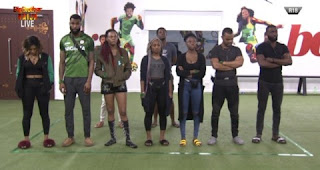 There is a new twist in this week nomination process as Big Brother Naija divide housemates into two group, the green team aka 'Cruisetopia' and the red team aka 'the Icons'. It's about to be a war zone in the #BBNaija House with the introduction of these House camps.

However, it seems some of the housemates are not happy about the group the fall into. Esther and Diane were cut on camera discussion about how they would have prefer to be in the same group with Sir Dee and IKE because they think they are team player. Let wait and see how things unfolds.

When asked in diary room, Diane said she would prefer to switch Gedoni for Sir Dee or Like.

Diane says she'd rather swap Gedoni or Venita and bring in Sir Dee or Ike into the 'Cruisetopia' team. #BBNaija https://t.co/4cHCj0BQLa pic.twitter.com/CHmY80L7BT

Esther says the two #BBNaija Housemates she would want on her team are Ike and Sir Dee. https://t.co/UIQwgI2mhs pic.twitter.com/KzgAsp5Qeq

It seems SirDee is a team player and with his cultural diversity and orientation, being able to relate, tolerate and respect all housemates is one of his greatest strengths and that's one of the reasons he is respected and loved in and outside of the Big Brother House.