Honorable Mohammed Gudaji Kazaure, a House of Rep Member from Jigawa State raised a motion in the house of Representative on the need to increase the recruitment of 10,000 Nigeria Security and Civil Defense Corps(NSCDC) instead of 5000. 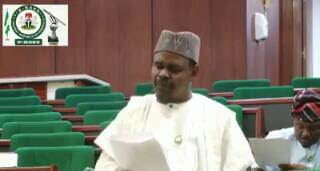 He stated that there is need for Federal Government and house of representative to make the arrangement of initial proposed of the 10,000 recruitment into the NSCDC. According to him, the house should recall in August 2019 that the FG directed the Civil Defense,Fire Service, Immigration and Prison Board to announced the large scale recruitment into the NSCDC. The recruitment exercise initially approved 10000 people into the organisation where more than 3 million people applied but unfortunately, the budget and National planning has reduced it to 5000 people against next year.

CONCERNED: The current situation of unemployment rate in the country is very high consider to more than 3 million people that applied for the recruitment exercise and one of the top agenda of Mr President is to eradicate unemployment as promised during our campaign. Also concerning the most important project is to employ people because the Major problem facing this country today is due to unemployment. So, in all our capital project what is important than to employ people.

WORRIED: In a country of nearly 200 million where just 10,000 people are approved but more than 3 million people applied but instead for the budget and National planning office to reduce some capital project and unnecessary expenditure so as to enable additional vacancies but they rather cut it down to 5000.

RESOLVE: Urge the house and budget and National planning to reduce some capital project and unnecessary expenditure in order to make sure that initial 10,000 approved recruitment is implemented as providing job opportunity is most important project to man kind.

Watch the video of the Honorable speaking in the house below:

Motion on need to increase recruitment of Nigeria civil defense to 10,000 instead of 5,000. Honorable Gudaji Kazaure