The Federal Government has proactively paid suppliers of foodstuff and cooks under the Home Grown School Feeding Programme for January 2020 to ensure that feeding the 9.9 million pupils in the participating States and the FCT starts immediately schools resume in the next two weeks.

The Minister of Humanitarian Affairs, Disaster Management and Social Development, Hajiya Sadiya Umar Farouq announced this in Abuja, explaining that the payment covered the cost of feeding pupils in the 33 participating states.

The Minister disclosed that the funds were released in December to give the suppliers and cooks adequate time to procure and stock foodstuff to ensure that pupils eat -qmty of the meals given to the children. Hajiya Sadiya said the Federal Government has gladly received reports of improved attendance in the schools and improved hygiene among the pupils, adding that these outcomes were some of the reasons for setting up the programme.

Under the National Home Grown School Feeding Programme a total of 9,963,726 pupils are fed in 54, 942 schools across the country served by 107,862 suppliers and cooks. The programme is one of the components of the Social Investment Programme (SIP) of the Federal Government under the purview of the Federal Ministry of Humanitarian Affairs, Disaster Management and Social Development. 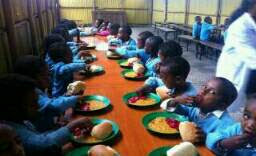 Media to the Honourable Minister