BBNaija Erica Fans Raised 14,000 Dollars For her Few Hours After she was Disqualified. Their plan is to raise 100,000 dollars to assist her after the Disqualification. 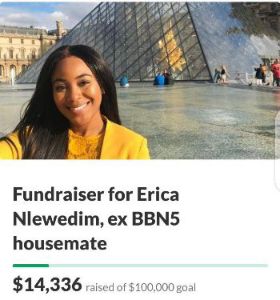 For Erica Nlewedim, the star of BBNaija season 5, Lockdown edition whose journey on the show came to an emotional end To realize some of her hopes and aspirations, her fans have organized a GoFundMe fundraiser on behalf of her to raise 100,000 dollars for her.

Big brother housemate, Ngozi ‘Erica’ Nlewedim, popularly called Erica, has been disqualified from the reality show on Sunday 6th of September 2020 for confronting fellow housemate Laycon, over claims she tried to kiss him.

Her repeated flouting of Big Brother House rules also earned her the disqualification.

Erica, who was the Head of House (HOH), had earlier gotten two strikes for repeatedly breaking the house rules.

If this can be done for Erica why can't Npower exited volunteers get similar favor from well-meaning Nigerians to aid some of them to start a business rather than letting them go back to the street?