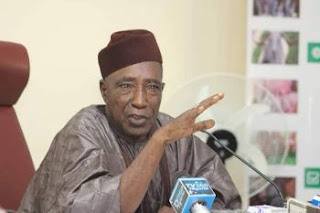 The Minister of Agriculture and Rural Development, Alhaji Muhammad Sabo Nanono has revealed that the Agriculture for Food and Job Plan(AFJP) Programme would create Five Million Jobs to enhance Agricultural Productivity, Food Security, economic growth and also mitigate the negative impact of the COVID 19 Pandemic on Nigeria Farmers.

Speaking during the Ministerial Press Briefing to commence activities to celebrate the 2020 World Food Day with the Theme: GROW, NOURISH, SUSTAIN, TOGETHER, #OUR ACTIONS ARE OUR FUTURE, held at the Minister's Conference Hall in Abuja, TUESDAY 13, October 2020. THE Minister stated that the objective of the plan is to create Five million jobs in the agricultural sector by ensuring that farmers cultivate more land in each state, provide zero-interest loans to farmers and agricultural inputs among others.

Alhaji Sabo Nanono stated that " out of the F“ million planned beneficiaries for AFJP, the ministry has empowered 1,138,000 farmer-beneflciaries across the 36 states and the FCT under the first phase of implementation".

The Minister added that ”since the beginning of the 2020 farming season, the Ministry has distributed inputs in states across the country to boost food production. Nigeria last year recorded a boost in the production of her major staple crops”. He further said, ”according to the data in the Ministry, maize and rice production rose from 12.8 and 12.3 to 13.94 and 14.28 million metric tonnes (MMT) respectively last year”.

According to the Minister "as a nation, we consider the relevance of eradicating poverty and hunger and transforming our food production systems to ensure sustainable food security. Significant progress has therefore been made to improve agricultural productivity since the inception of the present administration".

Speaking further, Nanono said, “to boost food security, Nigeria has curbed imports and has established a robust rice production programme to encourage more rice production at home. Efforts in this direction are starting to show results as Nigeria is now Africa's largest producer of rice".

He added that "the country is also the largest producer of cassava in the world. A range of policies and initiatives to strengthen the rice and cassava value chains have been put in place. The economic potentials of both livestock and fisheries are also being harnessed and respective value chains selected and targeted for development."

In an attempt to diversify the economy, the Minister explained that the "Federal Government has continued with its renewed focus on the agricultural sector. The government has deepened the culture with the Anchor Borrowers programme initiative and ban on the importation of some agro-commodities".

He emphasized that " the Central Bank of Nigeria (CBN) and the National Bureau of Statistics report indicate that Nigeria's National Agricultural Import Bill also reduced from 1.2 to 1.1 billion Naira”.

The Minister informed that " the Federal Government through the Agro Processing Productivity Enhancement and Livelihood Improvement Support Project (APPEALS) has set aside N600 billion as loan support to farmers across the country, No fewer than 2.4 million farmers are expected to benefit from the loan which has zero interest".

He assured that " the support was to complement the Federal Government’s policy on agriculture, which include: promoting food security, improving farmers production and also increasing exportation".

The Minister also stated that " a comprehensive flood mitigation and resilience plan for the affected farming communities nationwide have been finalized by the Ministry for consideration and approval by the President", adding that the Ministry has raised her national food reserve stock to 109,657 MT, a figure expected to be increased to 219,900 MT by the end of 2020.

The World Food Day is celebrated by over 150 member nations annually on the 16th October and nations including Nigeria line up activities to mark the day such as a symposium/ colloquium, agric and roadshow. But this year's celebration is Low keyed in compliance with the global Covid -19 pandemic.