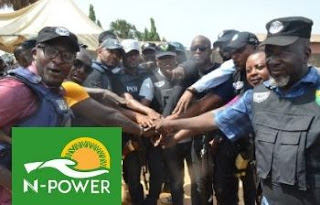 According to the Senior Special Assistant to the president on job creation and youth employment, Mr. Afolabi Umoukhuede, one of the reason why they considered using Npower volunteers for community policing unlike the NYSC where you are yanked from your base and taken somewhere else, N-Power volunteers that are community based, the beauty of this programme is that it is so transformational because they impact their community where they reside  "That's the beauty of the N-Power that the governors saw.

These are foot soldiers for community policing. There's no state that has less than 10,000. Some even have more than that. Osun, for example has 17,000 and Abuja here; we have 14,000. 80 divide it into local governments," he said.

He said the community policing proposal was an opportunity to engage the NPower volunteers. "That will now become an exit program. This is something that we have marketed to the governors and to the MDAs.

“In the last three years or so, the federal government has been investing directly in lives, these people should be like 'your right of first refusal'," he said. On when the community policing would be launched, he said, “we don't have a date yet as the governors are still in discussions with the police command and other security agencies on the modalities."