Gana made this known at the inauguration of the agro-ranger squad in Maiduguri on Wednesday. Gana, who was represented by his assistant, Augustine Obiekwe, disclosed that about 5, 000 trained agro-rangers would be deployed to about 2, 500 ranches across the country.

He explained that the corps introduced agro-ranger squad sequel to requests by the former Minister of Agriculture, Chief Audu Ogbeh, to ensure protection of ranches and farmlands.

The commander added that the agrorangers were exposed to specialized combat; intelligence gathering, flrst aid and conflict resolution skills during their training at the Peace and Conf1ict Management College, Katsina.

Gana revealed that 75 agro-rangers were deployed to Borno under the first phase of the deployment, adding that the measure was imperative in view of the insurgents' attacks on farmers and herdsmen.

"Special agro-ranger squad are being deployed to protect ranches and farmlands as well as provide intelligence on livestock and dams. "The corps is geared to protect liberated communities in Borno, so that people could return home and cultivate their farmlands," he said.

Also, Mr Abdullahi Ibrahim, the Corps Commandant in the state, said the agrorangers would work alongside 120 members of the Civilian Joint Task Force (CJTF), hunters and vigilante in the Maiduguri environs.  Ibrahim added that the squad would be conducting patrol at Njimtilo; Moloi-Kura, Tamsu-Ngamdu, Masu, Shuwari-Karaye and Madu-Ajiri axis of the town. He urged the agro-rangers to be guided by the rules of engagement governing their operations.

While commending Gov. Babagana Zulum of Borno, over his support to the corps, Ibrahim called on organisations and wealthy individuals to support the squad to ensure its sustainability and success.

Ibrahim also called for synergy between the agro-ranger squad and other security agencies to tackle insurgency, and protect farmers and communities.

In his remarks, Zulum reiterated the commitments of the state government to protect lives and property in accordance with the provision of Section 14 (1 b) of the constitution. Zulum said that his administration would adopt proactive measures to strengthen security institutions to enhance peace restoration in the state. He also presented 10 patrol vehicles to the agro-ranger squad, and pledged to provide communication gadgets to the squad. Watch video below: 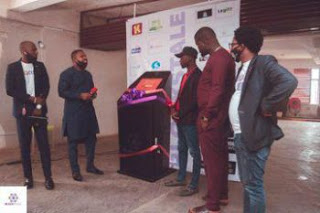