The National Commandant of the Peace Corps of Nigeria, Dickson Akor, has expressed confidence that despite the massive opposition by other security agencies, the Bill for an Act to Establish the Peace Corps before the National Assembly, which has passed second reading, will be passed into law and assented to by President Muhammadu Buhari. In this interview with John Osadolor and Innocent Odoh, the commandant decries the misconception surrounding the Peace Corps, which he insists is an organisation with the zeal to bridge the security gap and complement the efforts of the other security agencies rather than the speculation of the duplication of functions. Excerpts: 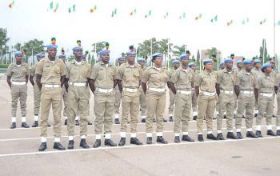 The proposed establishment of Peace Corps of Nigeria has been generating serious controversies among security agencies, particularly the Nigeria Police, on the grounds that it would duplicate the duties of the existing agencies. You have made remarkable efforts in the past to dispel this narrative but the police appear adamant. How are you managing this challenge?

Well, to correct an impression, the current police force under the Inspector General of Police (IGP) Mohammed Adamu, are not antagonizing the Peace Corps. The issue of the police being against the Peace Corps I think was the handiwork of the former IGP Ibrahim Idris, who raised baseless allegations against the Peace Corps after fruitless efforts by both the police and other security agencies to scuttle the process of the bill at the level of public hearing.

I want to remind you that when the bill was pending in the two chambers of the NASS, for an act to establish the Nigerian Peace Corps, there was a gang-up by the security agencies but during the public hearing in both chambers a total of 784 memoranda and oral presentations were made. And out of these only 4 institutions kicked against the establishment of the Peace Corps but as somebody, who is weII-read, I feel what they are doing is normal. Those who want to maintain the status quo or the existing system will always work against any new idea or any new invention.

At this level so far, we have passed through a lot of institutional challenges in the hands of the Police, the Department of State Services (088), and the Office of the National Security Adviser (NSA). In the course of trying to show our innocence and ensure that our fundamental human right is not taken away from us, we were in court for 17 times15 times at the level of the federal high court and 2 times at state high court, and in all these matters we won.

I want to tell you that despite the landmark victory we recorded in all these matters and not found wanting before the law, one of the agencies still sneaked to the Court of Appeal in Owerri without our knowledge to file a matter for one of the judgments we got against them to be vacated. What happened was that at the end of the proceedings at the Court of Appeal, Owerri Division we won. It is the 088 that flied this appeal and we don't know how they filed this appeal from somewhere and claiming it was us. But thank God the judge upheld the judgment of the lower court Owerri and also upheld the legality of the Peace Corps of Nigeria.

So, what is happening to us is not strange. We do know from day one that l initiated this organization that we are going to pass through some institutional challenges and that is what we are passing through.

You have spoken well of the current IGP, but in terms of your activities, how has he collaborated with you?

As far as I am concerned the extent he went was to try to obey the court judgment based on the intervention of the Attorney General of the Federation (AGF). That was what led to this current IGP to respect the rule of law, thereby obeying the earlierjudgment which was given two or three years before he was appointed. The former IGP disappointed and disobeyed the judgment and many otherjudgments. But immediately the current lG's attention was drawn to it by the AGF, he complied and this office was vacated on the 28 February this year and that day coincidentally was exactly the day it made it three years that this property was sealed by the police.

In terms of collaboration, at my level looking at the overwhelming security challenges, its impact on the socio-economic life of Nigeria and the way the crime situation is projecting Nigeria in the international community which is a negative projection, l have written several letters to some of these security agencies that there will be a need to partner with an organization that is grassroots-based like Peace Corps and others which members are fully integrated within the local community that make their job easier.

We see a lot of things happening in Nigeria, some of which if you report to some security agencies the way they go about it encourages more crime to be committed. 80, less than two weeks ago, I wrote to the National Security Adviser, begging for the third time that no matter how we have been misrepresented, leading to us being stereotyped, we are Nigerians and we still have interest in the security and the well being of this country. And what we want is to be given an audience.

There are suggestions that the Peace Corps will substantially reduce crime situation. You can look at the implication of what was happening. Peace Corps today, there is no locality and local government you go to today in Nigeria that you won't find significant numbers of youth. There is no state we have less than 4,000 members and these youths are coming from local communities.

READ ALSO: Benefits And How To Register Your Business With CAC

Therefore, based on the letter that I wrote, my suggestion to the National Security Adviser (NSA) was that there could be a designated desk in the office of the NSA to bring organization like Peace Corps, Man O’ War and other voluntary youth organizations together and ensure that even if somebody is coordinating, let us be supplying that office with primary security intelligence. I call it primary intelligence so that nobody will feel that we are coming into competition with anybody. All that we are doing is just to complement.

But my position remains that no matter the level that you equip the security agencies even if you give them angelic swords, mount the armored tank in every state, in every community in Nigeria, the crime rate will continue to surge.

So, what is the core mandate of the Peace Corps of Nigeria?

The core mandate of the Peace Corps is to develop, empower and provide gainful employment for the youth in order to facilitate peace, neighbourhood watch, volunteerism, community services and nation-building.

The Bill for an Act to establish the Peace Corps of Nigeria suffered some setback. The House of Representative passed the bill in 2017 but later stepped it down after President Buhari refused assent to the bill. The lawmakers cited the issue of inter-agency rivalry among security agencies as one of the reasons for the bill to be stepped down. But the National Assembly has re-introduced the bill in early August 2020 and it passed second reading in both chambers. What is the hope of making the Act possible?

What are the reasons given for stepping the bill down? One was the duplication of services which Ijust cleared. The former IGP and his allies have the listening ear of Mr President and that to an extent caused the setback. For the Peace Corps if not what we are doing now, I have no access to the President even the people in the security that he appointed that we wanted to meet we have no access to them. We believe that Mr President has done things that are noble.

There is an international body that declared Mr President as the most incorruptible President anywhere in the world. He does not have foreign bank accounts and he does not stash any money overseas. So, based on that we believe that certainly somebody who will serve as a mediator that will hear our cry, somebody who properly understand what we are dong, will one day lay our issue before Mr President.

The government has invested a lot in terms of fighting banditry, terrorism, herdsmen clashes it is a notable fact that the government is concerned with that. If Mr President is doing that and he got to be properly briefed that what we are doing is not necessarily duplication of any agency’s function, I believe it will go a long way to help the situation.

By Innocent Odoh and John Osadolor.