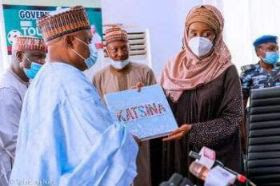 FG Launches Cash Grant for 6,800 Rural Women in Katsina: The Minister of Humanitarian Affairs, Disaster Management and Social Development Sadiya Umar Faroug has flagged off the distribution of the Federal government's Special Cash Grant to 6,800 rural women in Katsina State including women with Disabilities.

The minister announced at the Muhammadu Buhari House in Katsina that beneficiaries for the program who are vulnerable women from the 34 Local Government Areas of the state will benefit from the cash grant targeted to serve as business capital for women to reduce the effects of the Covid-19 pandemic on their households.

She noted that one-third of the beneficiaries were women with disabilities while two-thirds were widows, women from internally displaced families and other less privileged women from across the state.

READ ALSO: N60,000 Is The Empowerment And Not Wheelbarrow And Cutlass - FKeyamo On SPW

“A total number of 6,800 beneficiaries are to benefit from the cash grant of 20,000 each including 203 women with disabilities. This is to uplift the socio-economic status of the rural women in Katsina State. It is our hope that the beneficiaries of this programme will make good use of the opportunity to increase their income, enhance their food security and contribute towards improving their living standard”.

The Minister also disclosed that N9.5 billion had so far been disbursed as Conditional Cash Transfer grants to 142,000 poor and vulnerable households in Katsina State since the inception of the program while President Muhammadu buhari has given approval for the expansion of the Social Register to accommodate more poor and vulnerable Nigerians with the aim of lifting 100 million Nigerians out of poverty by the year 2030.

In his response, Governor Aminu Bello Masari of Katsina State, who was represented by his Deputy, Alhaji Mannir Yakubu noted that since inception, the Conditional Cash Transfer scheme has lifted thousands of households out of poverty in the state.

He urged the beneficiaries to make judicious use of the grant. I want to thank His Excellency the President and Commander in Chief of the Armed forces for all his intervention programs of which Katsina state benefited immensely. We in Katsina state are grateful for the Special Grant for Rural women especially at this time that most are caught up in the hardship necessitated by the COVID-19 pandemic. However, we want to assure you that the beneficiaries will make judicious use of the grants”.

Earlier, the Special Adviser to the Governor on Empowerment and Special Interventions, Alhaji AbdulQadir Nasir disclosed that Home Grown School Feeding has employed over 10,000 women as cooks in the state and also fed 834 thousand pupils in 2,700 primary schools across the state.

Umar Farouq thereafter made a symbolic presentation of the federal government special grants for Rural Women to some women With Disabilities alongside the Deputy Governor and the Executive Secretary National Commission for Persons with Disabilities (PWDs) James David Lalu and rounded off her flagoff with a courtesy visit to the Emir of the Daura Emirate , Alhaji Faruk Umar Faruk. 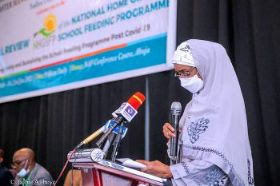